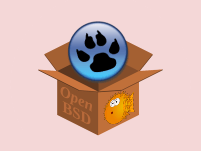 Are you using OpenBSD? Why not install Lazarus there? This article has you covered on how to do just that.

Recently have been using OpenBSD. Did you know it’s one of the most secure operating systems ever built by humans? They fix security holes before they’re even discovered and used in the wild. They had just 2 remote vulnerabilities in the default system in a long time, which is really low compared to other systems, even Linux.

OpenBSD is a cool operating system. So if you haven’t tried it and have some spare time, try it. It will change your thinking about operating systems. It’s a UNIX-like system, meaning most of the commands like cd, ls, cat are similar to Linux, so you’ll feel right at home if you ever used it before.

So lately I was looking for ways on how to use Lazarus on OpenBSD. And eventually, I found a way. I was successfully able to run Lazarus on OpenBSD 7.0 release and 7.1 snapshot. So hop on if you’re interested.

Where do packages come from?

We will be building a package for Lazarus. Don’t worry, it’s easy. But first let’s learn a bit about packages.

Packages contain binary files for a program we wish to run and the information about which dependencies are needed to run it etc., so that a package manager knows how to install it. So a package is a packaged program wrapped in a package file. :)

When we install packages to use a program or what not, the packages have to come from somewhere, right? They have to be made. Usually Linux and BSD operating systems have their own build systems for this. These build systems, well, build the package files for us.

When we run pkg_add, apt install, pacman -S or any other package manager “install” commands, they just download these nicely built package files and installs them on our computer. Convenient, right?

A build system not only just builds the packages, it optionally applies changes to the source code as well so that they run better on the platform. So they’re a very important part of the platform’s ecosystem. Build systems usually have “recipes” for every package we use and it does the build process based on those recipes.

OpenBSD has such a system which is called “ports”. In the OpenBSD world, a single recipe from that ports collection is called, you guessed it, a “port”. If running ls /usr/ports on your OpenBSD system doesn’t return directories like audio, fonts, games etc., then you probably don’t have OpenBSD ports installed.

Is Lazarus package already there on repos?

I don’t have a “lazarus” package on my OpenBSD 7.0 release version’s repository, so I used the following process to install it. But don’t worry, it’s easy if you follow the steps here. But it’s always a better idea to backup the system before trying this.

NOTE: The package for Lazarus is not included in the main repo yet, at least at the time of writing this. In case you want to check, try running pkg_info -Q lazarus. If it shows “lazarus”, you can install Lazarus with doas pkg_add lazarus and you won’t have to go through the rest of the port building process.

NOTE: You will need a system which has X11 installed in order to build a port. That means you will need to have file sets having x at the beginning installed on your system. If you have a graphical system with mouse pointer and such, chances are you’re already covered. If not, you can install file sets on an already installed OpenBSD system. Another thing to remember that instructions below are for OpenBSD release version and not meant for current or snapshot. For those, please check the end of the article.

So, run these on a terminal program to install ports on your system:

It may take a long time depending on your system.

We’re basically downloading the ports collection, verifying that it’s a legitimate copy, then extracting it in /usr/ports.

If you are new to command line:

Do not run exit yet. With still logged in as root, continue to next step.

Now, we’ll get the third party repo that contains a Lazarus IDE port. Thanks to Dr. Brian Callahan for maintaining the port. In future, when Lazarus package gets included in the official repos, you will not have to use this repo at all. But for now:

We need to install fpc, gmake, libiconv, gtk+2 because they are required by Lazarus build process. Depending on your setup, some of them might be already installed. The pkg delete command uninstalls any existing lazarus packages. If it says Can't find lazarus, feel free to ignore it.

At the time of writing this, the port is at 2.0.12 (run grep ^V /usr/ports/devel/lazarus/Makefile to check). It may be updated later, so don’t worry about the version number for now.

UPDATE: The port has been updated for 2.2.0-0, so you’ll get the latest version without any effort.

Let it do it’s thing. Gradually it will download the source code of Lazarus, build it and install it.

Type exit and enter to logout from root prompt and use the terminal normally.

Now you should be able to run Lazarus from applications menu or if it doesn’t work run lazarus-ide from terminal. 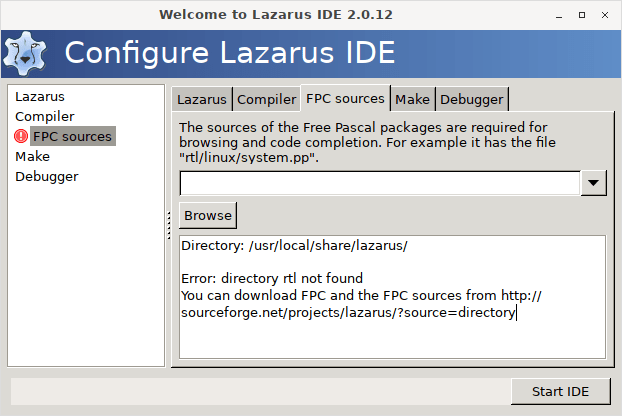 NOTE: If you require a different version of FPC other than “3.2.2” (run fpc -v to know which one you need), please change it everywhere in the following instructions.

If it extracted completely, you can delete the source file with: rm ~/Downloads/fpc-3.2.2.source.tar.gz

Then enter the path /usr/local/share/lazarus/fpc/fpc-3.2.2 in the Lazarus dialog box and continue.

When you have it running it should show up something like this: 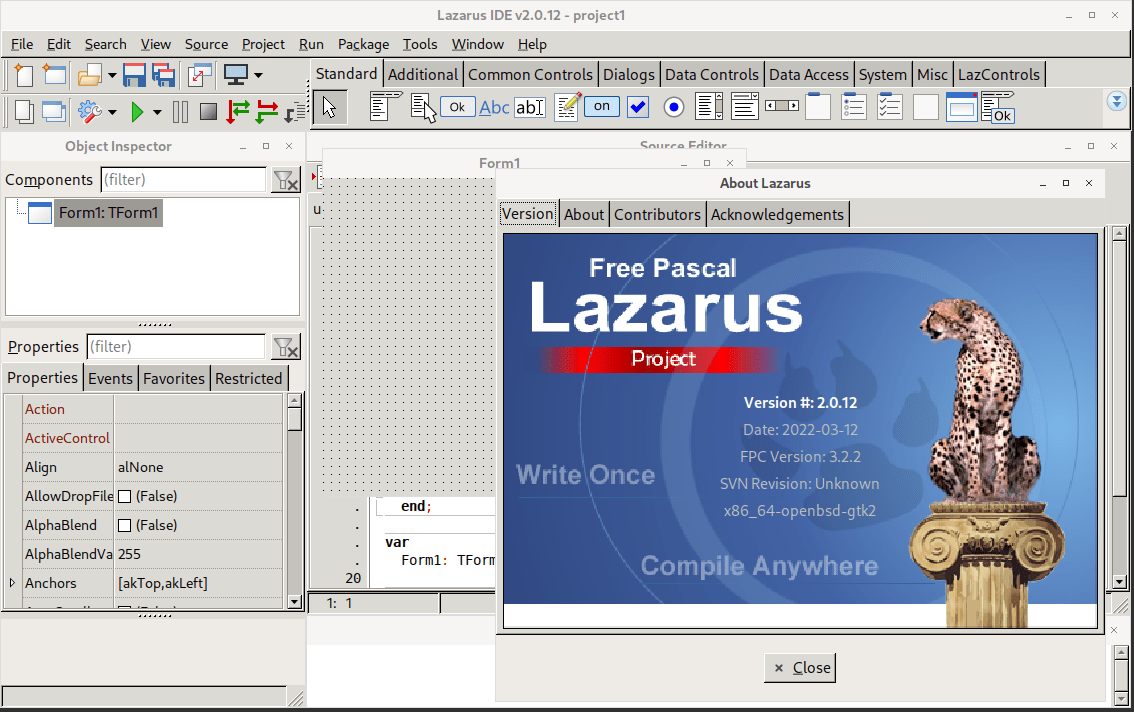 For most, the journey ends here. But for the curious ones, it starts. You are free to skip this step.

The version on the port was 2.0.12 when I tried it. If any newer version is out by the time you read this article, go to this SourceForge page and look for the latest version number in the directory names listed there. It is currently showing 2.2.0-0 for me.

UPDATE: The port has been updated for 2.2.0-0, so you’ll get the latest version without doing anything further.

While this may not work for all the versions, you can change the version to 2.2.0-0 on the Makefile inside /usr/ports/devel/lazarus, then run make makesum from that directory, then run make install to see if that builds and installs the new 2.2.0-0 version of Lazarus. Depending on the development changes to the new versions, this strategy might not work.

(Remember to change the version 2.2.0 and 0 to the latest version)

While the build process is going on let me explain what we did above. You can skip this if you want. First we copy Makefile into Makefile_backup because we’re going to modify the file. It is a better idea to have a copy in case we mess up.

In OpenBSD ports system, the version 2.2.0-0 cannot be put as version as is, due to a bad FLAVOR 0 (admissible flavors ) error. This is probably due to having a - in the version causes it to think that 0 is a flavor (a variation of the package), which we don’t want.

So we use 2.2.0-0 as before for downloading source (DISTNAME), but show the ports system 2.2.0_0 as version number (with PKGNAME) to fix this. V = 2.2.0 is for main version number and V_APPEND = 0 is for appending the extra number. We use awk to add these semi-automatically into the Makefile file. It is a lot easier this way by just copy-pasting these commands.

So what we basically do is, we replace this:

But we let awk figure out where to put which text. Think of it as an intelligent replace command.

If the make command stops with errors, it will probably not work as is. Feel free to post a comment if you have an error. If the command is successful, it should end with something like this:

Don’t be alarmed by the warning messages. It will still work.

If the make install command ends with something like below, then install is successful:

You can now launch Lazarus from application menu.

Getting rid of startup issues

When you launch Lazarus, if you had previous installs on the machine, you may see an option to upgrade configuration, which you can do by just clicking Upgrade. 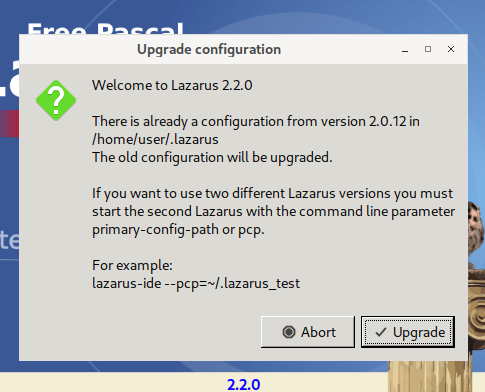 In the next dialog, you may also see a red icon beside Fppkg. 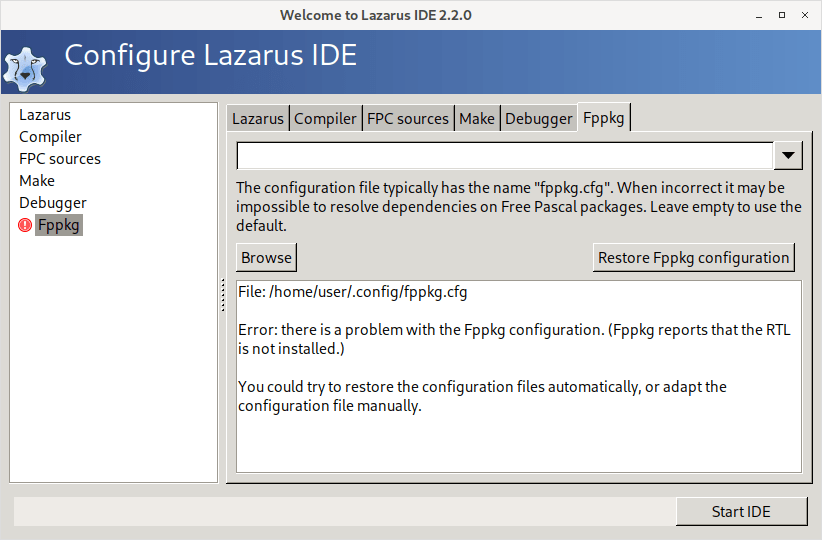 Don’t worry about it. Leave it as is and it will default to ~/.config/fppkg.cfg. If you get red icon beside FPC Sources entry, just follow the instructions above and put the sources path in the input. 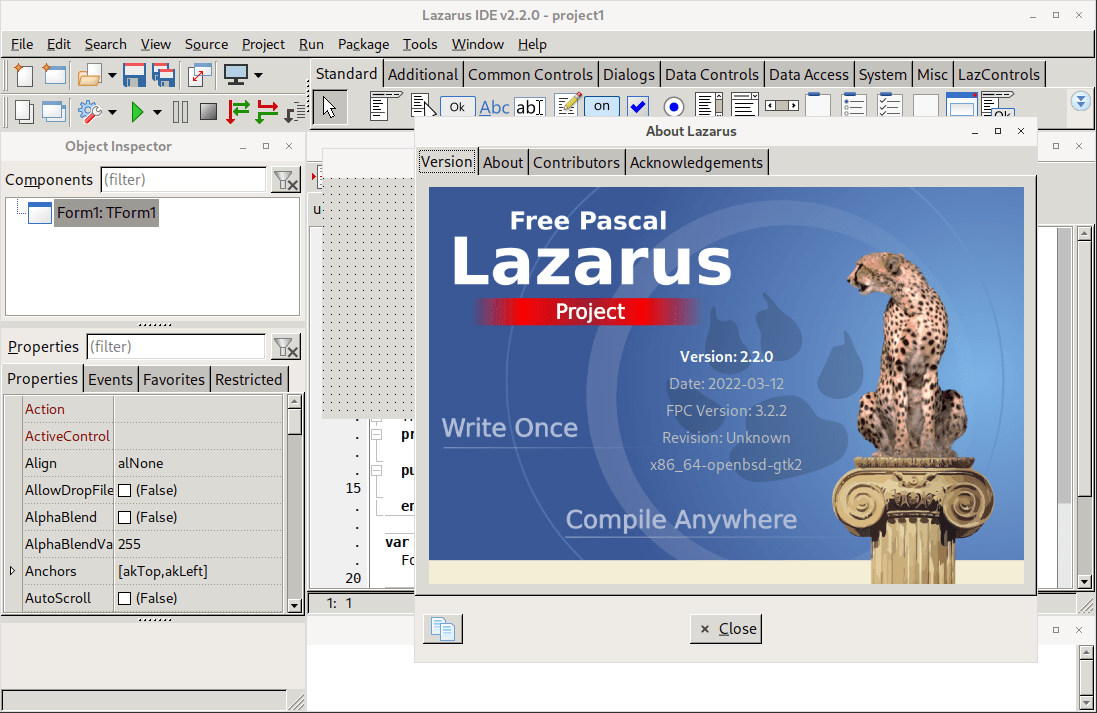 Another note. It shows an Illegal character in format string error when you try to build or run an unsaved project (initial project when you start it). You’ll have to save the project somewhere, preferably in a fresh new directory and then run it.

If make install doesn’t do anything, it probably means there are files from a previous build already existing in the system. In this case make clean=dist and make clean=flavors is probably what you need. If that doesn’t work, you may have to run:

Be careful with the command though. Make sure to cd into the devel/lazarus port directory before running and only run it if everything else fails. It cleans build files leftover from the previous builds and lets you do a clean build if you choose to. This is also useful if you are done building and installing the port and just want to clean leftover build files. It doesn’t affect existing installs.

If you just want to build the package and not install, then run make instead of make install. After the package is built, it should be available in /usr/packages/amd64/all (you may have to change amd64 depending on your cpu architecture).

If you want to build the package under OpenBSD snapshot or current version, which is totally possible, you can follow instructions on this page for ports setup then follow the same instructions in this article (starting from the git clone command) to build it.

So there you go, Lazarus running on OpenBSD systems. If you want to stay out of security holes and still use Lazarus, you now have a way!

If you got stuck somewhere, feel free to post it in the comments below, or use the contact page.

See comments for this article